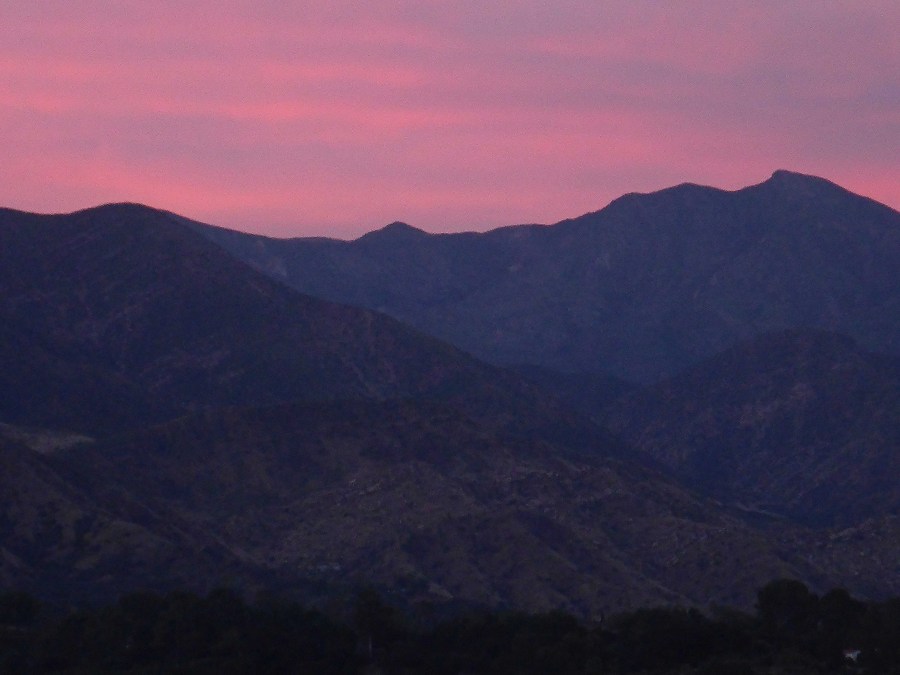 We needed a break. It had been a busy and stressful past couple of months. We had reservations in May for a week on the beach in Maui to celebrate our anniversary but canceled them due to family issues. Happily, the planets aligned in June and we were able to steal away for a couple of days. We craved quiet, rest, access to the outdoors, and yet, still be close to home. The Ojai Retreat & Inn was just what the doctor ordered.

Situated on a hill, with million dollar views, the Ojai Retreat is a gem. We had stayed there before, and there was a familiar, peaceful, feeling when we returned for our latest visit. There are only twelve rooms on site, so it never feels crowded. There are no TVs, radios, or phones in the rooms. There is Wi-Fi for people who just can’t disconnect, and admittedly we did use it to check out trails using AllTrails, as well as search out a couple of restaurants, but we didn’t check email, texts, social media or news. If there was an emergency, we could be reached through the Retreat’s front desk; otherwise, we were disconnected.

In planning our trip, Ruth and I talked about what we desired during our time away so we could be on the same page. It turned out we wanted the same thing: to sit outside in the evening, read a book, drink some wine with some cheese and crackers, watch the sunset, and catch the ‘pink moment.’ We were going to be there for three nights, so we brought three bottles of wine: one for each evening.

On our first night, we headed to downtown Ojai to try Food Harmonics. Our dinner had an Indian flavor to it, which paired well with a Grenache Blanc from Casa Dumetz. After supper, we headed outside, wine in hand, to the Ojai Retreat’s Pink Moment Terrace, with an expansive view of the Topatopa Mountains. The sun set slowly and we savoured the quiet time. Only one other couple came out to take advantage of the enchanting site. Sunday’s pink moment was subdued, but still enjoyable, and it was a welcome change to spend so much time just watching the light slowly fade. Later, we retired to our patio (we stayed in the Patio Room) to enjoy the half-lit moon and continue reading while finishing our wine.

By this point you may be wondering what this has to do with adventure. I’m getting to it, albeit, slowly. Monday morning started with a healthy breakfast at the Retreat, admiring the beautiful mountains we would soon be exploring. After our repast, we headed north, out of the city to get acquainted with the Potrero John Trail. We wanted to get an early start to avoid the heat of the day. In this, we failed; temperatures exceeded predictions, and Ojai would reach triple-digits.

The Potrero John Trailhead has room for one car. Any more than that and you have to park a little way before or after the trailhead. Thankfully, we were the first people there (not that there too many people dumb enough to be out on such a hot day!) The Potrero John Trail is in good condition and portions of the trail escaped the recent fires. There are plenty of, at this time of the year, easy stream crossings as you make your way north into the Sespe Wilderness. There were also enough wildflowers still in bloom to make it a colorful hike. After a while, we came across a beautiful campsite for one or two tents and ample shade – an invitation to return and spend a quiet night.

We stopped and took a break, then headed further up the creek. Parts of the trail were overgrown and the heat made the going arduous. We soldiered ahead and soon arrived at a stream crossing where the trail petered out. At this point, Ruth was getting lightheaded and stopped to take a break and drink more water. She didn’t realize most of her body was exposed to the sun, so I admonished her to get out of the light and into the shade, then plied her with more water. She rested while I attempted to find a way through the thick brush. I slowly made my way upstream, but the going was tough. I didn’t want to leave Ruth for long, so I turned back after a handful of minutes. Ruth was feeling better and I gave her some of my water. She soaked her bandana in the creek and used it to cool down by tying it around her neck; then, taking into account the heat and our dwindling water supply, we headed back. We welcomed a light breeze and discovered another small campsite. This area is a great place for an easy backpack in the spring when cooler temperatures prevail.

Back at the car, air-conditioner cranked to high, we drank more water and headed into town for lunch. We were tired and dirty, but the kind folks at Home Kitchen didn’t mind and quickly seated us and brought us ice-cold water. A couple of sweaty cyclists occupied another booth, hydrating before heading out again. We greedily downed half of our lunch, saving the rest for dinner. A quick trip to a local market for snacks was followed by a shower and nap.

Our perfect vacation day consists of a healthy breakfast, a mid-morning hike, lunch, a nap, a romantic dinner, followed with an evening of wine, reading, and soaking in the local ambiance. Except for oppressive heat, today was such a day.

We again found ourselves on the Pink Moment Terrace, earlier than on Sunday; this time we had an Albariño from Paco and Lola, and we were more relaxed and more in tune with our surrounding today. Soon we began to notice nature one sip at a time. There was a red-tailed hawk that alighted in a tree below us, a bevy of quail, a father, mother, and seven chicks, scurrying across the path, lizards scampering about, all manner of LBBs (Little Brown Birds) searching for food, a bold Western Scrubjay hoping to get some of ours, hummingbirds defying gravity as they darted from flower to flower, bird songs intermixed with the sounds floating up from the city.

We had no reason to move from our table on the terrace. The wildlife paid us no heed; we were not a threat. Time passed quietly. The light faded from the mountains. Clouds began to glow, then fade. The sky took on a pink hue, then dark. We retired back to our patio and set up our lantern so we could continue to read. Overhead the moon was slightly fuller than the night before, and its position overhead had changed. One thing I like about long backpacking trips is watching the lunar cycle. I don’t notice it in the city, huddled inside, walled off from nature, but away from home, the phases of the moon remind me of how long I’ve been away.

Learning our lesson from Monday, we planned a shorter, cooler, and wetter hike. Rose Valley Falls hardly seemed like a hike. Parking our call outside of the campground so we didn’t have to pay a day use fee, the walk to the base of the falls took less than twenty minutes. There were a couple of mothers with young, exuberant, children eager to get wet and play while the adults cautioned against slipping and falling. We climbed to the base of the falls, grateful for the cooling spray. After taking a few photos, we headed downstream to a quiet pool and rested.

I tried to wade in, but the water was cold: biting enough to where it hurt to stand in it for more than a few seconds. Entering into the water a second time I managed to slip and cut my foot, as well as bang it pretty hard. (A bruise would appear later and take several days to go away.) This was our cue to head down into the Ojai Valley for lunch.

The Farmer and the Cook is in the unincorporated area of Meiners Oaks, west of Ojai. It is a low key restaurant and a neighborhood favorite. We had lunch and dinner there on our last full day in the valley.

We found ourselves with one bottle of wine left, a Pinot Grigio, one I had picked up in Oregon the previous year. The reader may, by this time conclude that we enjoy our wine – which we do, but this was the first time we had ever drank three bottles in three consecutive nights. I couldn’t begin to tell you the last time we had even two bottles of wine in two nights. Somehow though, on this trip, it felt right.

Once more to the Pink Moment Terrace. The evening was slightly cooler than the previous night, and there was some overcast. We searched for our favorite hawk, to no avail, but there was still plenty of nature to observe. And the Pink Moment? It would be presumptive to say God saved the best for our last night. And whether he did it for our benefit or not is unimportant, what mattered was the sublime scene painted in the sky around us.

The next morning I awoke early and went out to watch sunrise. The cool air was refreshing, especially with the knowledge it wouldn’t last. The valley below stirred and came to life. After a while, I went back to bed in hopes of catching a bit more sleep before the long drive home. The Ojai Valley has a subtle, eclectic charm, and with its proximity to a plethora of outdoor activities, is a perfect place to get away from the hustle and bustle of the big city, and the Ojai Retreat is an ideal site to stay when in town.

A note about the Ojai Retreat & Inn: This article was not meant to be a hotel review, though it may have come across that way as I’ve spoken quite fondly of the Ojai Retreat. To be clear, we came here with no intention of writing an article, let alone a review of the property, and we did not receive any discount for our stay. I did leave feedback with Yelp, where I pointed out the Patio Room, where we stayed, did not have an outside patio light; we had to use our trusty Luci Lantern for illumination. (This was the only issue we’ve had at the property. The owner responded to my comment and they are reviewing ways to address this.)

The Ojai Retreat is not a frilly Five-Star Resort, nor is it suitable for children under the age of 12 (this, per the website, is to ensure tranquility.) If indulgent or kid-friendly is what you are looking for, there are other places nearby to meet your needs. The Ojai Retreat & Inn is a simple, quiet, and peaceful place. The hilltop location makes one feel set apart from the hustle and bustle below. For all these reasons, and more, the Ojai Retreat is my first choice when spending time in the Ojai Valley.

One thought on “Three Bottles of Wine: Three Nights in Ojai”