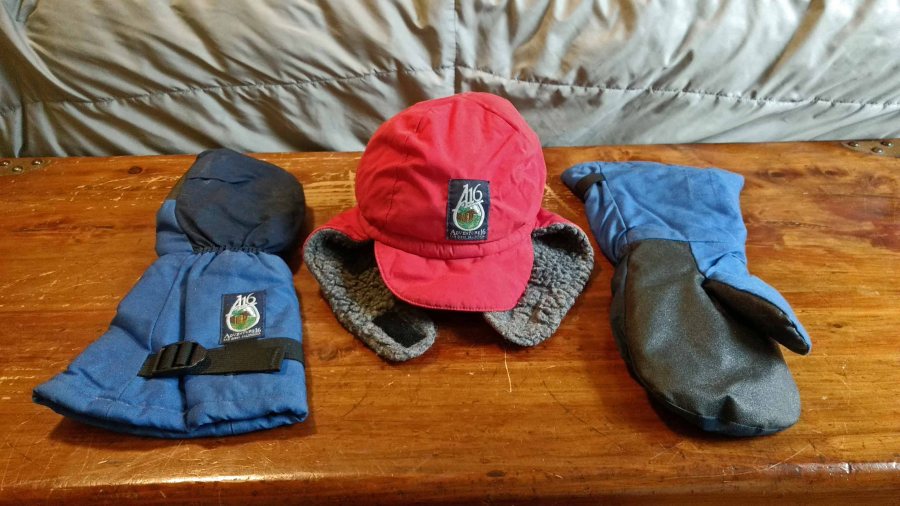 It’s Small Business Saturday.  The weather is cold by Southern California standards.  There are many other ways to spend the last day of November, yet here I am, braving the holiday weekend drivers, many of them staring at their phones instead of paying attention to the road, all to go to a store. But it’s not just any store, and it’s not for a sale, I’m here to say goodbye.

Walking through the wooden door, especially during the holidays, always brings back a flood of memories. A few steps beyond the threshold, on our left, hot cider beckons.  We defer for now, but I think back to many a morning at home; of sleeping in until the rumbling of my tummy gives me cause to roll out of bed, followed by a healthy (or decadent) breakfast with my lovely wife, and ending with me sipping a cup of hot tea from my favorite mug.

The mugs were part of a store promotion twenty-three years ago. Ruth and I each got one.  Unfortunately, one broke: the other still looks good, surviving the dishwasher and my handling year after year.  There are many reasons I love this cup: size, heft, design, but it’s more than that.  When I hold it and drink from it, I feel connected to wild places, even if I’m not outside. It’s also a reminder of the company that helped build a local outdoor community.

Sadly, Adventure 16 is closing its two remaining stores.  The company started building backpacks in the ’60s.  The West Los Angeles store opened in 1974.  Over the decades, other A16 stores opened and closed.  I lived in Costa Mesa during the eighties, not far from an A16 store, where I became a devotee of the brand.

We spot Erika, the store manager, walking the floor, and thank her for efforts and her staff, and we reminisce a bit.  Through A16, and their sponsored events, I’ve met many incredible climbers, authors, and adventurers: Adventure 16 alumna and polar explorer Sunniva Sorby, mountaineers Phil & Susan Ershler, climbers Tommy Caldwell and Beth Rodden, backpacker and ultralight guru Glen Van Peski, Semi-Rad creator and author Brendan Leonard, photographer Corey Rich, the Trailmaster John McKinney, Backpacker ambassador and host of the Get Out More Tour Randy Propster, just to name a few.  As much as A16 has meant to me, it means even more to Erika.  She met her husband, Mark, through the store, and together they have a young daughter, Poppy.

Ruth and I continue our stroll through memory lane.  I think about some of our Adventure 16 brand gear.  The past few days have been a reminder that winter is just around the corner.  It’s time to open the rustic cedar chest and pull out my Adventure 16 Bomber Hat and mittens, veterans of many a snow camp.  Come next summer, my A16 Bug Bivy will be called again to service.  It’s a testament to the company that their equipment, purchased in the previous century, has stood the test of time and will still be in use, even after they are gone.

We stop and say hello to Peter, himself a familiar face in the West LA store for more than a decade. Peter is one of the great group of employees working here.  We both have ties with the Angeles Chapter of the Sierra Club: Peter is working on his ‘I’ leadership rating, and I hope to have the opportunity to be a participant on some of his future outings.

Adventure 16 is more than just a store; it’s a Southern California institution.  They formed the Donate-A-Pack Foundation to “help at-risk, low income, or disabled youths in Southern California partake in outdoor wilderness experiences.” They organized the A16 3-Peak Challenge (hiking up each of the three tallest mountains in SoCal: San Antonio (Mt. Baldy), San Gorgonio, and San Jacinto). The company worked with the Banff Mountain Film Festival to bring the popular Banff Mountain Film Festival World Tour to San Diego and Los Angeles year after year.

There are a few items in our basket as we head for the registers.  A cashier notices a fire truck parked outside and wonders what’s going on.  I tell her, “Maybe they’re here for the fire sale.”  She smiles and says, “I’ll have to remember that.”

We pause near the door and finally indulge in some hot apple cider.  We say farewell to Erika before heading outside. 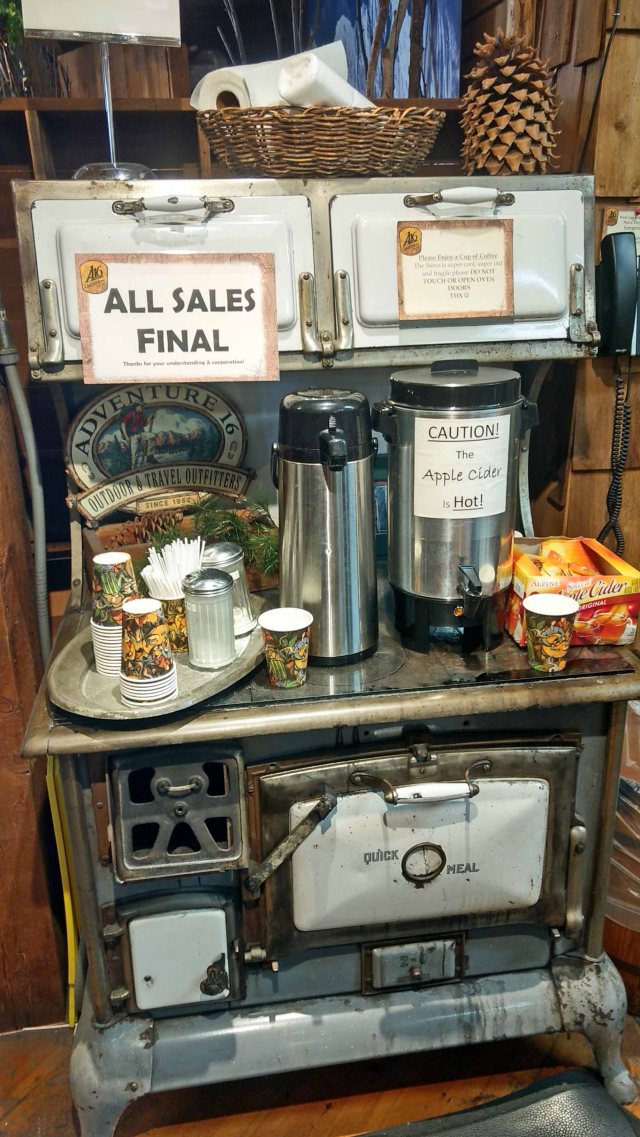 There is a small group of people waiting to get in (though nothing compared to the very long line on Black Friday.) 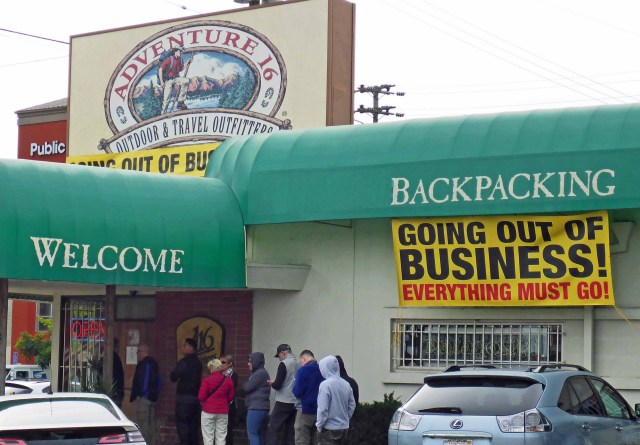 Retail has changed.  It’s a struggle for family-run or independent outdoor stores to compete with big-box stores, direct to customer sales, and internet retailers. I’ve bought gear from the aforementioned list; however, with only a few exceptions, I didn’t receive the same quality of service as when I visited a store with a knowledgeable staff: fellow outdoors people who had experience with the equipment they were selling, who happily took the time to make sure I had the correct fit, and who made sure I knew how to use an item before I left their shop; and, as a bonus, were familiar with the local area.

Change is the only constant in the universe, but not all change is for the better.  I am saddened by the loss of this fine retailer, for myself and the outdoor community, but I’m also grateful for years of life-affirming memories.  Thank you, Adventure 16.

One thought on “One Last Adventure to Adventure 16”

New Years' morning workout on Signal Hill. Temps in the 40s, beautiful views, and time together with Ruth.
On November 12, 1994, I proposed to Ruth. After all these years I'm still not sure why she said, "yes," but I'm very happy she did.