Overcast skies greeted us as we headed up Tunnel Mountain on Tuesday morning. Rain and snow were forecast for later in the day, but we were bolstered by relatively warm temperatures in the 30s. We met Barbara and David, friends from my Sierra Club climbing days, on the trail. They had started before we did and were already on their way down. Tunnel Mountain is a very popular trail, with easy access from the Banff Centre and from downtown, and we saw a number of people enjoying the late fall weather.

The cloudy conditions made for flat lighting, not the best for color photography; however, setting the camera to Black & White mode provided some dramatic pictures. 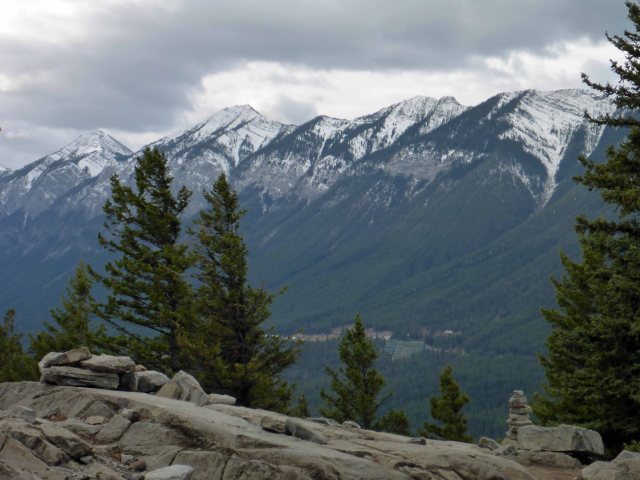 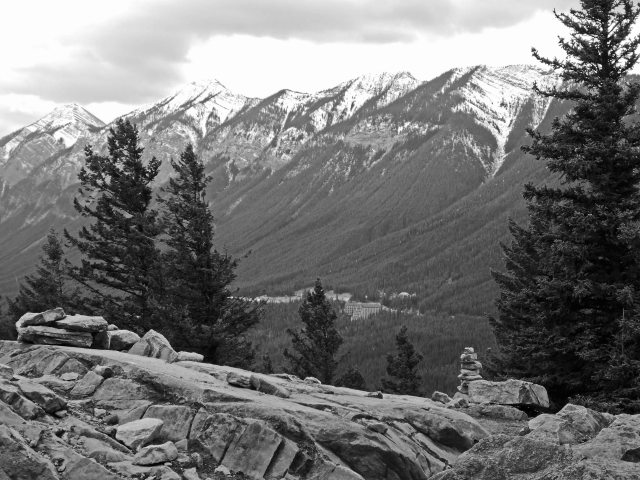 After the hike, we stopped at the Banff Centre to inquire about tickets for Wednesday evening. The Dirtbag Café had been sold out for a while, and I wanted to find out about standby tickets. None were unavailable, but Jennifer at the box office suggested calling back every couple of hours to see if someone had turned any in.

Midway through the afternoon, I tried the box office. As luck would have it, two tickets to the Dirtbag Café had just been turned in. SCORE! I gave them my credit card info and told them I would pick up the tickets that evening.

Radical Reels was on tap for Tuesday night, and the ever popular event was shown in two sold-out theatres. Seven diverse films provided quite the adrenaline rush, but the real excitement was yet to come. (Below are YouTube links to four of the short films, including my favorite: Imagination.)

While we were sitting in a warm, comfortable theatre, snow was falling. We found our car covered in powder and the driveways out of the Banff Centre were iffy. The parking attendants directed us to a rear exit, which included a steep incline up to the road. A minivan in front of us wasn’t able to make it up the short uphill section and ended up stuck off to the side with their hazard lights flashing.  When it was finally my turn, our rental car, a sedan, couldn’t make it up the hill either. There was a line of cars behind me, but I was able to back down to the left of them, then into a parking space, turn around and try to find another way. Thankfully the other outlet, although it also had a steep section, was in better driving condition and we made it out without any further problems.

Wednesday’s Dirtbag Café was a two-part event. First up was climber Will Stanhope who spoke about his many climbs in a homey manner. The Café is an intimate venue, with small cocktail type tables and chairs and a slightly raised stage, similar to what you might find in a nightclub. Will’s presentation was perfect for such a forum, he asked questions of the audience, handing out drink coupons to the first person who answered his queries. (I won a free drink by recognizing Conrad Kain’s portrait.) Stanhope’s photographs of the Bugaboos reignited my desire to climb there.

After intermission was the movie I was really looking forward to seeing: Dirtbag: The Legend of Fred Beckey. There was a slight pall over the crowd. Only two days earlier, Fred Beckey passed away. One of the most prolific climbers in history had finally hung up his boots. The movie, and the evening, was a memorial to the ultimate dirtbagger. It seems everyone who met Fred has a ‘Beckey’ story. The first Dirtbag Café event at the Banff Centre featured Beckey as presenter.

Thankfully, the movie didn’t disappoint. Dirtbag won the award for Best Mountain Feature Film and the People’s Choice Award at this year’s Banff Festival. Reflecting on the film brings up so many feelings, but the most poignant ones dealt with Fred’s decline in his last years. His will, his passion, his drive was still strong, but his body betrayed him. Age caught up with him, as it does to all of us eventually.

It wasn’t just Fred’s death though that weighed on me after the final credits. This project took years to complete, and over that span of time, many of the climbers interviewed for this biopic have also died. This sense of loss, which began with Bonington on opening night, would stay with me throughout the festival.

The daytime hours of Thursday and Friday centered on the printed word. Several of the authors were known to me, but one in particular has had a profound impact on my life. David Roberts is a prolific writer. His early books about climbs in Alaska are legendary: The Mountain of My Fear and Deborah. It was Deborah which helped me realize the best climbing stories are not necessarily about making the top. Bereft of a summit, a compelling story requires delving deeper into the people, emotions, decisions, and motivations. Though a youthful work, Deborah is a riveting story and paved the way for Roberts’ writing career. A later book by Roberts, In Search of the Old Ones, about the exploring the Anasazi world of the Southwest, caused me to question my focus on climbing and what I was missing by obsessively seeking summits to the exclusion of other outdoor activities.

Titled ‘Voices of Adventure’, David Roberts was interviewed by Geoff Powter, the same person who talked with Chris Bonington earlier in the festival. The discussion was one of the highlights of the festival. Roberts, who is suffering from stage IV throat cancer, was quite candid about his writing and life. The shadow of death loomed over the stage, and the odds are stacked against David ever attending the Banff Festival again. Roberts described his struggle with cancer, coming to grips with his own mortality, and his love for his wife. At the end, there was a standing ovation, the first I had witnessed at the festival.

Roberts was available to sign books after the program, and I took the opportunity to tell him how much I’ve enjoyed his writing and the influence it had on me. When I mentioned how In Search of the Old Ones caused me to reevaluate my relationship with climbing and how much time I now spend exploring the Southwest he smiled and said In Search of the Old Ones was one of his favorites. As I thanked him and walked away, I realized I would probably never see him again. If that be the case, I will take solace in the literary record Roberts has left for us.

We attended other writer forums and discussions and met several authors, including four Banff book award winners; one of whom, Bernadette McDonald, had the misfortune of being the person to follow the Roberts interview. We also spoke with two members of the book competition jury who told us how difficult a job it was to determine winners, such was the quality of the entries.

Thursday and Friday evenings were filled with more presentations, and of course, more films.  These were thirteen-hour days at the festival. Thankfully the Banff Centre has a couple of nice places to dine, our favorite being the aptly names ‘Vistas’. 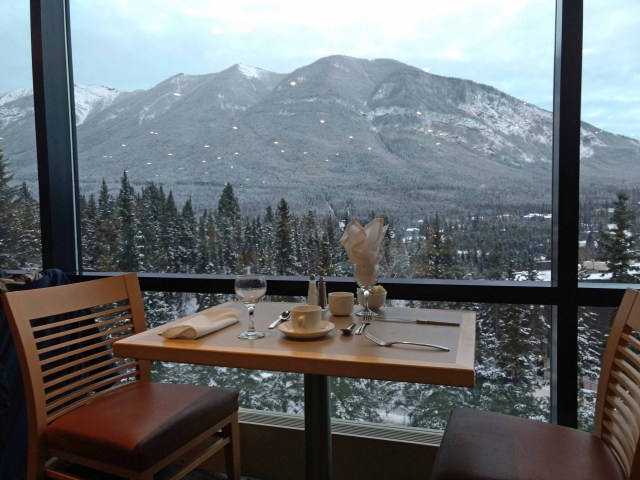 Besides the outstanding view and scrumptious cuisine, as festival volunteers, we received a significant discount on our meals at Vistas. More about our experience volunteering in my next post. To be continued…