Adventures can be fun, exciting, uplifting, and fulfilling; that’s why we keep doing them. But spend enough time on the road and the odds are you will experience a not so pleasant part of travel: being sick or injured away from home.

I was reminded of this last week, where instead of exploring a canyon only accessible from October through December, I was coughing, sneezing, hacking, achy, and generally feeling rather miserable. To be sure, it could have been worse. My wife was there to take care of me, we were in a nice room with a cozy bed, good plumbing, and access to the drug store. Not quite home, but comfortable enough, and our house was only a few hour’s drive away.

Having spent more than 100 days a year on the road over the last decade, as well as innumerable trips prior to that, I’ve suffered through injury and illness before. In some of those moments, I’ve never felt more alone. Invariably my initial desire is to head for home and to crawl into my own bed, but that’s not always an option.

Though it’s been a couple of decades, certain details of my first cross-country road trip are still etched in my conscious. A case of food poisoning in Odgen, Utah (to this day I still can’t stomach Chicken Stir-fry Teriyaki) left me exhausted and dehydrated. There was little sleep and no rest that night, most of the time one end of my body or the other was making deposits at the altar of a porcelain god.

I was scheduled to be in Boulder, Colorado the next evening, so after barely being able to keep down a slice of dry white toast and a cup of 7-Up, I set off in my truck via Wyoming. It was late October, there was snow in the forecast and some still on the ground from a previous storm. I made slow progress across the state and luckily found a rest stop to pull over at when pillowy flakes started to pour down. I got out of the cab, made my way around to the back of the truck, popped open the camper shell, crawled into my sleeping bag and tried to catch a little sleep, all the while hoping the snow would let up. Cold, hungry, nauseated, miserable, and spent, there were still hours yet ahead of me before reaching my motel for the night in Boulder. I didn’t want to think about how far I still had to travel before my final destination in D.C. Lying in my truck I realized no one knew where I was at; I was all alone.

Happily, there was a short break in the weather and I made it to Boulder in one piece, though the storm began again in earnest about an hour outside of Boulder. When the sun next rose I decided an extra night in Boulder was required before resuming my trek.

Sometimes you don’t have the option of spending an extra night. There were three of us on the Chilkoot Trail in Alaska. It was the end of the second day and we were scheduled to go over Chilkoot Pass the next morning. I stepped down from a tent platform carrying a pack, and BAM, turned my ankle, badly. It was twelve miles back to the trailhead or twenty miles over the pass to our exit point. Neither were great choices, and an evac wasn’t an option as long as I could still move.   We took stock of the first-aid kit: Advil, Ace bandage, ankle brace: it would have to do. My wife and Linda would take some of my weight.

The nice thing about backpacking in Alaska is there are plenty of streams with ice cold water: perfect for soaking a swollen limb. In the morning I decided to try to complete the trip. My favorite mantra of the trip was ‘no brain, no pain.’ We finished the trail, though it was quite some time before my ankle was anywhere near 100 percent. 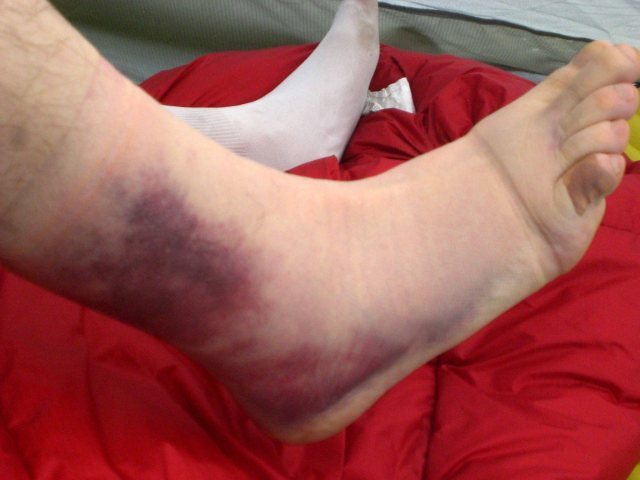 Sometimes though I’ve called it quits in the middle of a trip and headed for home, and there have been several occasions when I didn’t even make it out the front door. And that’s okay too. (It’s one thing to tough it out when you’ve already started, it’s another thing to begin if you’re not doing well in the first place.)

Adventures can be filled with uncertainty and unpleasantness, but they can also be life-affirming. While the possibility of illness on the road is part of the reality of travel, that shouldn’t stop us from heading out, because the rewards far outweigh the pitfalls.