How long does it take to get to know a place? The answer depends on the place and is contingent on how one defines the word ‘know’. There is also a difference between feeling connected to something and having intimate knowledge of it. One may come to the realization that you might never really know a place, no matter how much you want to.

This was how I felt leaving Olympic National Park on Washington’s Olympic Peninsula. Looking back, I wish I had stayed longer, but hindsight is 20/20 and we aren’t blessed with knowledge of the future. Even if I had extended my visit, it wouldn’t have changed my conclusion that I will never really know this incredible and diverse landscape.

There were no bad memories of my time in Western Washington, with the exception of an inordinate number of delays due to roadwork. When not stopped in traffic my time was spent rushing to and fro. Thankfully the summer sun sets late at these latitudes, giving me a chance to fit a little more into the day.

Case in point was a hike up the Sunrise Ridge trail from the Hurricane Deck Visitor area. The day began with me on a ferry leaving Seattle, then visiting a couple of lighthouses.

In the afternoon, I stopped at the Olympic National Park Visitor Center in Port Angeles to obtain a backpacking permit for the following day. After securing the permit there was just enough time to drive like a Californian up the mountain, visit the Hurricane Deck Visitor Center, and proceed to the trailhead.

As I was hurrying through the parking lot, I witnessed a young girl, with her mother’s encouragement, walking up to a deer and trying to feed it a bit of brush she was holding in her hand. The mother, of course, was taking pictures of this. I had spotted a ranger in the area a few minutes prior and started towards where I had seen him last, but thankfully he was already heading to the clueless parent. Credit to the ranger, he was quite professional in how he used this as an opportunity to educate the mother and the young girl. (I had started toward the parent to say something but realized it was best to get the ranger since what I would have yelled would be far less diplomatic or instructive.)

Leaving this scene behind, I started north towards Mount Angeles. It didn’t take long to leave most of the people behind. Probably due to the lateness of the day, I didn’t see anyone past the half-mile point. What followed was miles of pleasant hiking with grand vistas of the glaciated summits of the Olympic Mountains. Returning to my car I witnessed the high peaks bathed in the last light of the day. 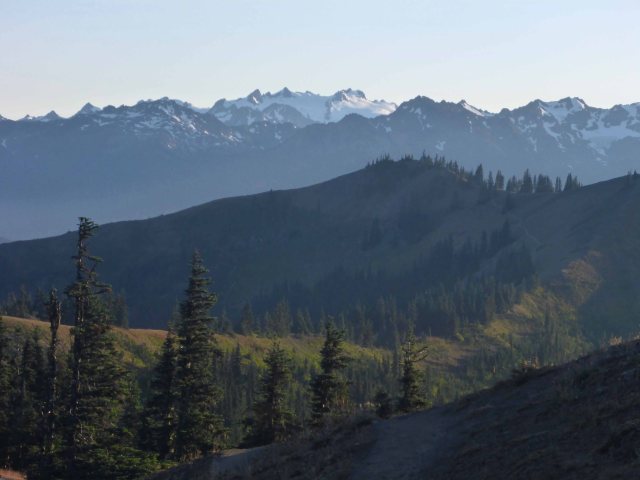 The following day couldn’t have been more different. Instead of hiking along a ridge above 5000’ with expansive views of the top of the Olympics, I was sauntering through the Hoh Rain Forest, heading up the Hoh River Valley. Yesterday there were clear skies, today I walked under heavy overcast with rain in the forecast. A hurried pace wasn’t required, which was welcome due to carrying a backpack instead of a light rucksack, though I didn’t have to carry much water with me since the river was never far away.

After a couple of hours of walking, all the while admiring the lush rainforest and breathing in the abundant oxygen, I arrived at Five Mile Island camp. The tent was quickly pitched, for although it hadn’t rained yet, the odds are it would before nightfall. Aside from preparing dinner, the rest of the day unscheduled. This is one of the joys of backpacking, once you are situated, you can, if you so choose, rest and relax. Sure you can explore the area, write in your journal, perhaps bag a peak, but you can also prepare a cup of tea, read a book, or take a nap. Today was a day to relish in doing nothing; the Italians have a saying for this: “dolce far niente”.

Few, far too few, are the times where I sit back and just let the day go by. Sad, really, since there is much to be obtained by just being still. Here, on the bank of the Hoh River, I was content just to be. Surrounded by wildness I felt a deep calm come over me as the daylight slowly waned.

Light precipitation fell during the night, no real surprise when camping in a rain forest, and it had been in the forecast. My tent provided comfortable shelter and by morning there was only a light drizzle. The sun never made an appearance during my time in the Hoh Valley; drying my gear would have to wait.

The walk back to the trailhead was peaceful and there was almost no one on the trail. The few people I did encounter were other backpackers until I was close to the Visitor Center. At my car, instead of being elated, I was felt melancholy. 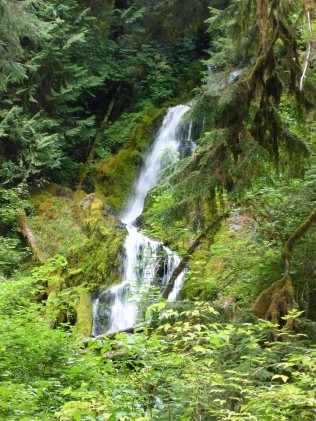 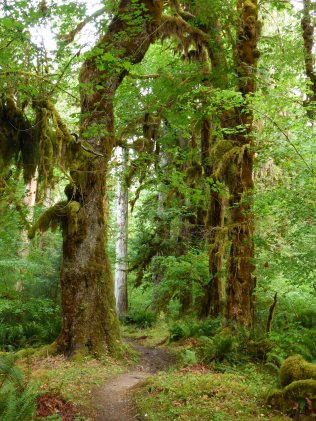 The visit to Olympic National Park had been all too brief. A much longer stay was required. Yet I understood, no matter how many trips I made here, I would never really ‘know’ the park, and probably never achieve anywhere close to the level of comfort I have with my favorite haunts. The park was too large, too diverse, and too dense for me to ever fully explore, especially given the logistical challenges to get here from my home in Southern California. Normally this is where I would quote Robert Service and be glad for a ‘Land of Beyond’, but today the poet’s words provided no solace. I found Olympic National Park too late in life, and with it, the awareness there are other places just as spectacular which I’ve still yet to behold.

Thankfully, there is still time to push back the veil on some of these locales while choosing a select few to become intimate with. After all, that’s the most anyone can realistically do with just one life.