Several years ago Rolf Potts, author of Vagabonding: An Uncommon Guide to the Art of Long-Term World Travel, gave a presentation at ‘The Do Lectures’. As part of the speaker series for that year, each presenter was asked to identify a ‘Big Do’ and a ‘little do’ as part of their talk. Rolf’s ‘Big Do’ was “Be Where You Are”. You may have heard the same thing in different terms: live in the moment, attention on the present, etc. It’s a simple enough concept, easy to understand; however, most of us fail miserably at it. How many of us can relate to Luke Skywalker when he is getting scolded by Yoda in ‘The Empire Strikes Back: “Never his mind on where he was. What he was doing.”

Looking forward instead of being where you are can rob, or at least detract, from the present. Last month, after the solar eclipse, I spent some time in Portland. As part of my stay there I made a couple of forays into the Columbia River Gorge. During those trips there were many spots on the trail I could have, and should have, stopped and soaked in the view; to just be there.   The thing was I had someplace to go to after each hike so instead of being present I kept looking at my watch and kept marching on.

If overbooking the day wasn’t enough, there is always the smartphone. In our modern age, with cell towers reaching even into the backcountry, it is easier than ever to be distracted, to be focused elsewhere. Too numerous to count are the number of times I’ve checked email, posted to social media, played with various apps instead of enjoying nature and being in the moment. I’ve gotten better about this, but there is plenty of room for improvement.

Now, to be fair, I did pause to take pictures, took hydration breaks, marveled at the scenery, and stopped to have a snack at scenic vistas, so it wasn’t all go-go-go, but there was still an underlying desire to keep moving. The trips were fun, but it could have been so much better if I wasn’t distracted by upcoming events, and when I left the Gorge after the last hike, my thoughts were on coming back here again next year. 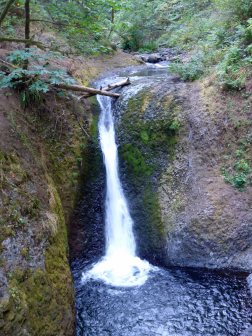 The future isn’t guaranteed. Several days after I left, the Columbia River Gorge erupted into flames. Places I had visited were now devastated. It’s still too early to assess all the damage, but it’s extensive. Portions of the Oregon side of the Columbia River Gorge may not fully recover in my lifetime, though there are still many nearby areas which were unaffected by the fire.

There’s an obvious lesson here: be present, be where you are, you may never have this opportunity again. My plan is still to visit the unaffected areas of the Gorge next year, only this time I will be fully present when I do.

I've been rather remiss in posting this year. When COVID cases were going in crazy in January, I went back to 'hermit mode' and, except for wishing people "Happy Birthday" on FB, I tried to cut back on social media during Lent.
Another early morning on the trail this past Saturday, this time to try to beat the rain. (The operative word is 'try.')  There would have been a few more shots, but my phone ran out of power and shutdown, which was a bit annoying since my trail map was on the phone.  (Always bring a paper map and compass!)